Posted on 21 February 2012 by jonathan in Articles, Controversies

Tawny Fish Owl (Bubo flavipes) is a very rare nocturnal Owl in China; its population remains poorly known because of the difficulties to locate this species; there is less than one sighting every year in the “China Bird Report”. The typical habitat of this species is made of streams or rivers of medium size along which it comes fishing, and bordered of woods the bird uses to roost during day time. Being very steep, these wooden sites are often really tricky to access, and to survey the stream at night is extremely dangerous sometimes.

By the end of January, early of February 2012, I got the opportunity to spend 3 days at Da Yao Shan Reserve, in Guangxi province. This reserve is known for the quality of its woods, centenary trees are found at many places there. It is a mythical place for birdwatching activities in China, the place has been surveyed by several birdwatchers before World War Two, and therefore has such a nice bird’s list. Some of the species that can be found there are some of the most rare in China, as the Gold-fronted Fulvetta (Alcippe variegraticeps). However, these past years, Da Yao Shan has been seldom visited, and some of the species mentioned there have not been seen since almost a century. During my survey, I experienced hearing a Brown Wood Owl (Strix leptogrammica), first record since 1923 for the reserve.

Another mythical Chinese bird, the White-eared Night Heron (Gordachius magnificus) appears on the reserve bird’s list, but apparently with no recent record. Thus I decided to spend half a day looking for suitable rivers for this species. The White-eared Night Heron shares the same habitat as Tawny Fish Owl, a species I wanted to observe since a long time in China, despite a few unsuccessful  attempts in other reserves in South China.

On the afternoon of February 1st, at about 30 km east of Jin Xiu town, I reached one of the river there; it was the end of the dry season, indeed the water level wasn’t very high, but held enough water to fit with what corresponded to the ideal of my two target species. The sides of the river were well wooded, I was really confident on the place I had just found. 500 meters down one of the river meander, I noticed 4 poles, of a diameter of about 15 centimetres and 3 to 4 meters high; each pole was disposed about every 50 meters, and had a wire fixed on the middle and seemed to go to the pole. Getting closer, I noticed that a pallet-trap had been disposed at the top of each pole.

Pallet-trap disposed at the top of the pole and linked with its by a wire,  Da Yao Shan, February 1st, 2012

Furious by this discovery, but not that much surprised, having come across quite a lot of mis-nets and noose-traps in the neighbouring hills, I continued to walk down the river. In another meander further down, I realised that one of the wire of a pole was going down; getting closer to this pole, I found that a large Owl was caught dead in the trap.. 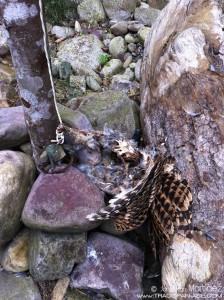 A quick check of the bird, which according to the smell was probably there since a couple of days, even weeks, makes me realise that the bird was a Tawny Fish Owl, by the unfeathered tarsus and feet, eliminating a possible Eurasian Eagle owl (Bubo bubo), as well as the lack of clearly delimitated facial disk, as well as the wing pattern. The breast feathers were also broadly striated with blackish steaks eliminating a possible Brown Fish Owl (Ketupa Zeylonensis). I had just found my Tawny Fish Owl, but not the way I wanted… 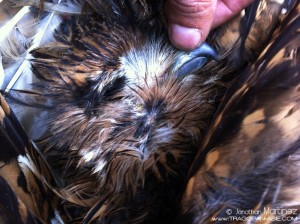 Note the broad blackish barring on the primaries and secondaries. 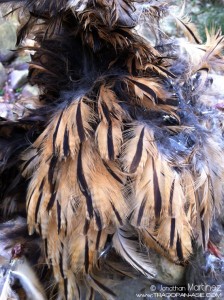 Note the broad blackish streaks on the breast feathers. 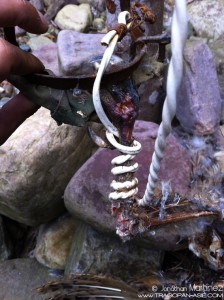 The wire winded up the bird’s tarsus show how horribly this bird suffered before he died.
Owl are highly sought in China, especially for traditional Chinese medicine, with a lot of properties assigned to them, pushing the price of a single bird quite high, corresponding to a few months salary. It seems that this one will finish decaying along the river. I guess that being in the Chinese new year period, the one who put this trap was probably back to his home town, during the festival, leaving all these traps without keeping an eye on them and active. Just a few meters behind the bird, was this advertisement board; I took a picture and asked help for translation later. The board said that anyone noticing any illegal activities related to the flora or fauna may call the Forestry department; a phone number was given below. 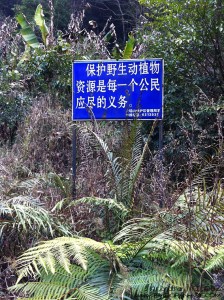 I let you draw your own conclusion, given the scarcity of this species, how damaging for its population is the loss of any individual. Despite my chances to see a bird alive that day were just reduced to nothing, because of my discovery, I decided to continue surveying this river. I found more than 15 of these poles along the river, some of them having been clearly put recently with no traps on their top… each meander getting its pole and every other suitable perch around having been methodically destroyed to force the bird to land on the pole…

I found several suitable places corresponding to the favourite fishing spot the White-eared Night Heron like: shallow, quiet water, with gravel on the riverbed. I even found two ardeidae faeces. In spite of 2 hours hide along the river until the night came, under a thin rain, and soaked, having crossed several times the river, with an ambient temperature of 5° Celsius (I was pretty much motivated by the faeces I just found), I haven’t been able to find any notable bird, apart from some of the Chinese common stream species: Brown Dupper (Cinclus pallasii), Slaty-backed Forktail (Enicurus shistaceus), Little Forktail (Enicurus scouleri), Plumbeous Water Redstart (Rhyacornis fuliginosa). The way back, by night with the headlamp, on slippery rocks because of the rain, was particularly tiresome.

At the moment I’m writing this article, I’m preparing a report to be sent to the Forestry Department of the Guangxi province, with the help I hope, of different NGO, whose reply I’m expecting… I will publish the coming events later following this article.

I would like to thanks Richard Lewthwaite who provided me the Da Yao Shan reserve birds list as well as one in preparation for the Guangxi province.

The Tawny Fish Owl I found dead is the first known record for the Da Yao Shan area.

Tawny Fish Owl is classified as “Least concern” by the IUCN, its statue in China remains unknown.

Tawny Fish Owl is protected in Category II in China, as all other Strigiformes.